I really like the idea of this dish (p. 138). I love tomatoes. I love scrambled eggs. I love shallots and garlic. Pretty much all ingredients in this dish. But somehow, the reality of it just didn’t deliver. 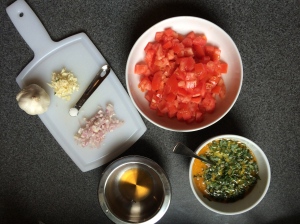 From the outset, I was concerned whether this would have too much liquid involved. As such, I carefully deseeded the tomatoes and removed as much juice as I could by hand. The only other deviation from the recipe was using basil instead of cilantro, since I had it on hand and it goes well with eggs and tomatoes in general.

Basic procedure is to briefly stir-fry the garlic and shallot, add tomatoes and rice wine. After a minute or so, in with the egg and cilantro mixture (or basil, in this case). Cook just until the eggs are done. 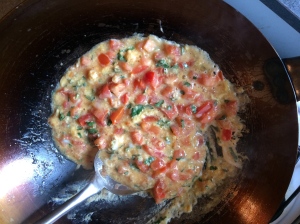 Unfortunately, even with my tomato cleaning, this still ended up being a runny mess. I did my best to salvage it by spooning it over some toast, but any real flavor remained trapped by the liquid in the bowl.

I’m pretty proficient with eggs and breakfast in general, so this was a disappointment. I could perhaps do a couple things differently, but I think that overall this is probably not something I’d try again. 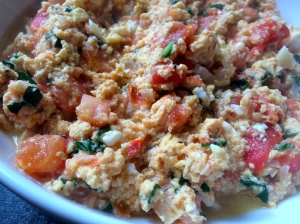 What I Would Do Differently

Next on the Menu: Spicy Orange Chicken